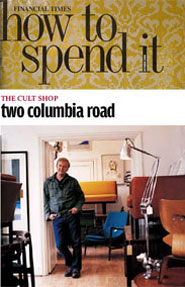 October 2006
Financial Times – How to spend it

Keith Roberts’ childhood was steeped in cutting-edge retail. He remembers his father, the charismatic retailer Tommy Roberts, striding about in green sneakers with Mercury-like wings, which he sold at his pop-art-inspired early-1970s London boutique Mr Freedom. At 14, Keith worked at his dad’s 1980s homeware emporium Practical Styling, also in London, then carved his own niche as an assistant to photographer Terence Donovan and as camera operator on films including Eyes Wide Shut. But in 1999, Roberts Senior’s and Junior’s paths converged again when they decided to open Two Columbia Road in Shoreditch.

Father and son transformed “a shady house-clearance shop” into the luminous white space it is now. Initially touting vintage toy robots, its USP became beautifully made, pareddown Danish furniture by the likes of Hans Wegner and Finn Juhl (his Easy Chair, c1958, is below, £1,100). “Six years ago, vintage furniture shops were dominated by poppy plastics but I realised people wanted smart again,” says Keith. “Eclecticism is the trend now” – and his stock reflects this. Fans include Gilbert and George and Jake and Dinos Chapman.

With five massive windows, the shop has an extrovert, attention-grabbing façade. When I was there, two Shoreditch trendies tumbled in to check out an idiosyncratic star piece in the window: a 1970s TV-shaped educational device into which you slide images with ultraretro graphics illustrating things such as how cows are milked in modern farms (£350).

Yet much of the furniture is sober and chic. Take its many Scandinavian conker-brown leather sofas. A three-seater by the Danish Borg Morgenson in 1978 (£1,400) is just the thing Keith’s typical customers – “young couples setting up a home” – go for: “They want functional furniture yet are interested in design and don’t want to go to Ikea.”

Counterbalancing this elegant furniture is plenty of whimsy. Danish designer Arne Vodder’s 1950s sideboards – which fit the current fad for streamlined sideboards – have inlays in playfully contrasting wood tones. There’s also a 1964 Jetsons-esque rosewood cabinet, by Kai Kristiansen, whose top pops up to reveal a cocktail bar (£750). And there’s an abundance of Eames chairs (£320-£1,400), chrome Italian lighting (1970 stalactite-like ceiling light, £250) and poppy artworks, including a rainbow-bright Terry Frost screen print (£3,500) and a portrait of Ossie Clark by Cliver Barker (£2,000).

Now he’s a book dealer, many of Tommy’s design tomes are sold here. Keith also likes to move in new directions. “I’m getting into English furniture by modernists like Ernest Race. And taxidermy.” (Cases of British birds, £1,800, c1910.)

The adventurous may prefer a relic from the Mr Freedom era – a pair of those sneakers. Yet such is Keith’s attachment to childhood memories these are certainly not for sale.